I received the 15 gallon complete kettle from Everwood for Christmas, and recently put it together, it’s this one:

It came with a grain basket, but now that it’s assembled the kettle’s temp probe won’t allow the basket to go fully into the kettle and sit on its feet. I’d planned on using it to try brewing in a basket but I don’t see how it’s possible. Is this expected? Just wanted to be sure since I’m a rookie. I’ve got a MashedIn bag on the way so I’m fine either way but I wanted to check. Unless the probe does a 90 degree bend I’m not seeing how to get the basket in there.
Top

hmm, is there a shorter temp probe you could exchange for?
"Twenty years ago — a time, by the way, that hops such as Simcoe and Citra were already being developed, but weren’t about to find immediate popularity — there wasn’t a brewer on earth who would have gone to the annual Hop Growers of American convention and said, “I’m going to have a beer that we make 4,000 barrels of, one time a year. It flies off the shelf at damn near $20 a six-pack, and you know what it smells like? It smells like your cat ate your weed and then pissed in the Christmas tree.” - Bell’s Brewery Director of Operations John Mallet on the scent of their popular Hopslam.
Top

I bought a second hand 15 gallon kettle from a fellow brewnoser who was upgrading to a 20 gallon one. He had replaced the long temp probe with a shorter one to use with a brew in a bag setup as the long probe caught on the bag. He needed the shorter probe for his new kettle so switched the original one back onto the 15 gallon before selling to me (I was not complaining as I got it for a great price). On his recommendation I purchased the smaller probe myself. There doesn't appear to be any issue with reading the temp of the wort correctly using the shorter probe.

I'm not sure if the shorter probe would allow your basket to fit but it would definitely be a benefit if you go with the BIAB setup although I'm pretty much still a noob myself so if others have better suggestions they probably know more than me!
Top

Hmm. Even if I place the basket in against the opposite wall of the kettle I still only have about an inch of clearance on the thermometer probe side. Unless they make like half inch length probes I don’t see this working sadly. Maybe I’ll call them tomorrow and see if I’ve missed something. A smaller basket would work, as long as it supported 5-9 gallon batches’ grain bills. Thanks for then input folks, if anyone else has anything I’m all ears.
Top

Basket.jpg
This basket is too small for a 19 g pot but would work well for a 15g pot. Wondering if you have a mesh basket or one with larger holes like the Bayou Classic baskets?
You do not have the required permissions to view the files attached to this post.
Top

I’ve got a mesh basket. It looks very similar to yours other than the size, here’s a shot from Christmas on my phone, best I can do right now at work. Not sure how apparent it is in this image but there’s verrry little space between it and the wall of the kettle. 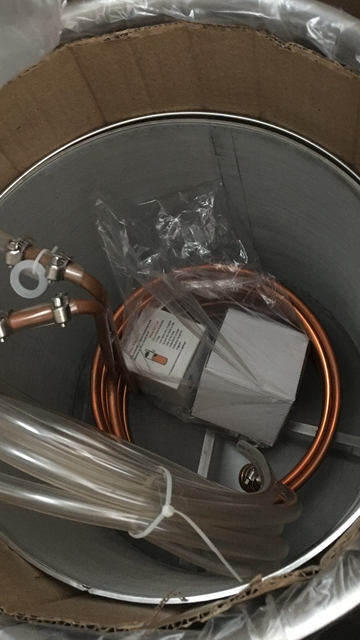 Yeah that looks tight. Sounds like you'll need to plug the temp probe or use a bag as you mentioned.
Top

I think so too. I wonder if Everwood would trade me for a smaller basket too, as long as it would hold the grain bills I’d be using I’d be fine with that. I’ve got that Mashed In bag on the way anyway but I’d like to have both options since the kettle came with a basket. Easier to set up a lift for if nothing else, I think.
Top

Can't hurt to ask Everwood. If they can't I'd like a bigger basket so if your basket is bigger than mine I'd entertain a swap. My basket can take 15-17 lbs grain so ok for a low gravity 10-12 gallon batch. I modified the legs (half inch shorter) to fit in my shorter but wider 19 gallon pot. No pressure and I didn't know Everwood carried baskets.
Top

Hi Woody, just checking back in. I was watching a video on a DIY electric BIAB system and my basket is actually the size I need. He puts his brew bag in the basket, and the basket keeps the bag off the element. I should have figured that part out but anyway seeing it demonstrated clued me in. I still have to figure out the deal with that thermometer probe though but the basket is perfect. Thanks again for the swap offer anyway.

For reference here’s what I was watching:
https://www.youtube.com/watch?v=dew2v5wxhr8

Edit: just spoke to Everwood, they’re going to give me an extension that will keep the thermometer farther out, keeping the probe from from pushing so far into the kettle. Problem solved!
Top